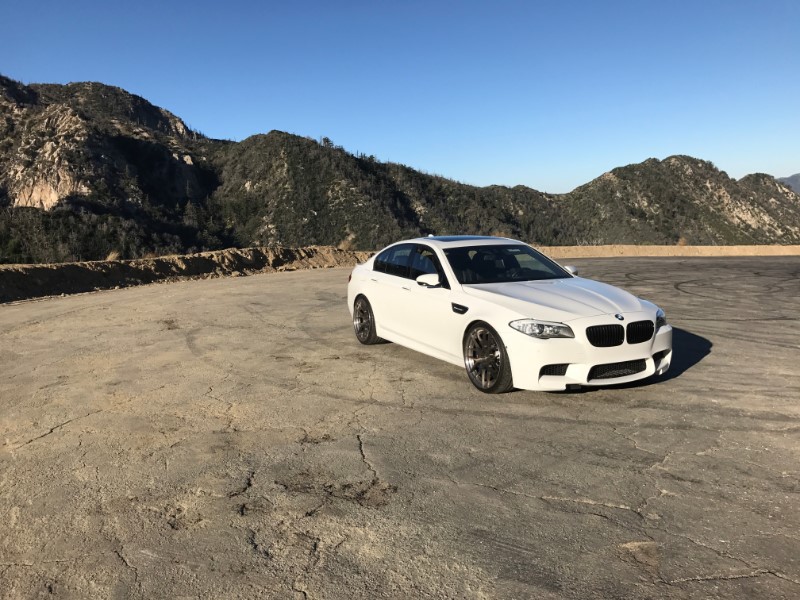 In my recent look-back at the history of the M5 I said that the E28 M5 started the Super Saloon trend for which Germany has become so well-known. In a recent trip to Los Angeles, I decided to see how far these cars have come, and utilized a rental service called Turo (stay tuned for my review of Turo itself!) to get my hands on a properly insured, modified example of the more recent F10 generation.

As I needed to transport my wife, and our friend, the backseat was paramount, as was civility along LA’s pitted streets. As this trip was a vacation, I didn’t want anything mind-numbingly boring either: the canyons of One Take fame were so close after all. On paper, the F10 M5 was a proper choice, with almost 580bhp, and heated seats all around, the power and comfort was theoretically there. After 3 days on LA’s streets and a romp through the forest canyons, I can certainly say the M5 was put through its paces.

A standard BMW M5 is not really ‘standard’ at all. Featuring widened front body work to accommodate the wider front track, combined with unique rear and front bumpers, the F10 M5 stands out from other, lesser 5-series almost immediately. That rear bumper incorporates four exhaust tips, further cluing in fellow motorists as to the nature of the car.

These four tips are used to channel the exhaust from a twin-turbocharged 4.4L V8, where the turbos are nestled in the V of the engine, for increased efficiency. While smaller in both cylinder count and displacement over the previous M5, this engine is no slouch, producing more power at 553hp and around 500lb-ft of torque.

The interior of the M5 is just as large as other 5-series, meaning four to five people can sit comfortably. All M5’s come with adjustable chassis and engine settings, allowing adjustment of ride harshness and throttle sensitivity, among others. Leg room is a non-issue, even among the loftiest of individuals.

The particular BMW M5 we received was equipped with a few factory options on top of the standard equipment. The front seats featured heating, cooling, and air massage, while the rear seats only had heated buns. To compensate, the rear passengers were treated to the Executive Sun Shade package, which adds mesh sunshades, effective for the passenger and non-distracting for the driver. To wrap everything up, the sound system was spec’d to max, and sounded as good as could be desired.

To haul everything around, the owner had also selected the competition package, bring power to around 575bhp, which was certainly a welcome addition.

As this was my first time using Turo, I would be lying if I told you I wasn’t apprehensive. The pictures of my car hinted that it would not be stock: it was very obviously on aftermarket wheels and tires. As this can ruin some cars, I was anxious about the ride quality. As this is very much a two-faced car, I have decided to split this review in two below: city and canyon driving. The only other modification of note, which was unexpected, was the exhaust. Featuring an Eisenmann performance exhaust, the engine note was certainly enhanced over stock.

The car itself was in excellent condition, with no hint that it was a rental car of sorts. The seats were like-new, with the paint as pristine as can be expected. Overall, the car was simply as expected, with none of the rental car nightmares customers tend to dread.

In the city of Los Angeles, the 2015 M5 was perfectly livable. Could it have been more softly sprung? Sure, but that is not the spirit of the car. While I could have rented an S-class, I choose the M5, and as such, choose the slightly (slightly!) compromised ride. Surprisingly, the aftermarket wheels and tires did not seem to dramatically affect the ride quality. With everything set to comfort, the M5 was a perfect cruiser for the three of us.

What was less than perfect for city driving was the SMG III gearbox the M5 comes equipped with. A dual-clutch automatic featuring 7-speeds, the SMG III gearbox is a picture of performance perfection. Unfortunately, the center of LA does not require the apex of performance shifting; rather, it requires smoothness and ease of operation. That, irritatingly, is where the SMG III box fails. Starts from a stop can be slow and jerky, while the gearbox itself is chasing gears upwards almost constantly.

Most importantly, as the picture above shows, there is no ‘P’ setting. The car automatically enters Park when the car is turned off with the parking brake engaged. While smart sounding, problems immediately arise when pulling up to something that requires the car to be in park, while running. Say, a valet. I will fully own up, and say that this may be user error, however, should a transmission be so complicated as to have user error?

All of this ceased to matter when I drove up to Angeles National Forest, and found roads like Upper Big Tujunga. The gearbox proved itself capable of ‘right-now’ shifts, while the engine was able to provide even more ‘right-now’ power. While a four-door sedan nearing 600hp may sound like a handful on tight, curvy roads, the M adaptive systems proved to be up to the task of controlling the body.

On that note, of the four performance settings—regarding throttle response, shift response, damping, and steering feel—some experimentation may be required. For instance, I found that having the throttle response and shift response on maximum awareness, while leaving the damping and steering in comfort, rewarded the best all-around performance driving feel.

Driving through LA to get to the canyons, it is easy to get into the rhythm of driving a big sedan, and to adjust driving habits accordingly. Getting into the canyons, if you do not shake those habits real quick, then allegedly triple digit speeds are a surprisingly scant few seconds away with an open road and judicious use of the throttle—which itself is rewarded by a *BLAP* *RRROOOOOOAAAARRRRR* from the exhaust.

The 2015 BMW M5 with Competition Package that I had the privilege of driving for three days in LA delivered exactly as advertised. To my wife and friend, it was a comfortable, big BMW, eating up road imperfections and providing a haven from the surrounding traffic. To myself, it was the Bavarian Wunderwaffe I had hoped for—and slightly expected—eating up mountain roads, and making its own spots in traffic.

Have any questions or comments? That’s what the section down below is for! Remember to like and share with your friends, and stay tuned for my review of the Turo experience!