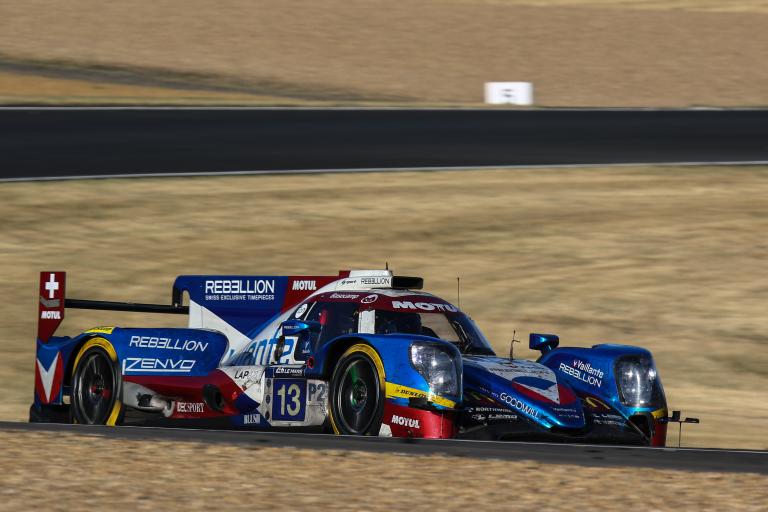 Officials at the 24 Hours of Le Mans have announced today that the #13 Rebellion LMP2 Oreca 07-Gibson will be stripped of its overall third-place podium finish. Officials came to this decision after the team failed a post-race technical inspection, which is required by all finishing teams. After the race, cars are parked in Parc Ferme—literally ‘closed park’ in French—where teams are no longer allowed to touch the cars, and technical inspectors will go through ensuring all rules were followed.

Despite the rules, members of the team were seen fiddling with the car in Parc Ferme, and as it turns out were trying to cover a hole with duct tape. This hole was formed by the team to access the starter motor for an early race repair, rather than taking off the entire rear of the car. They then sent the car out with this hole, which then constituted an illegal body/aero modification. Covering it up with duct tape is a final nail in the team’s coffin.

While time-saving the repair ended up costing the team their finish. While unfortunate for the team and the drivers, this is why tech inspections exist, and is a prime example of such inspections working.

Following the FIA World Motor Sport Council meeting in Geneva, the 2017/1028 FIA Formula E Championship schedule has been released. The schedule for the 4th ever year of Formula E’s existence shows thought and expansion being expended on the series, as the new schedule is more compact time-wise, while also featuring the most races of any season. This is achieved through the addition of three new cities—Santiago, Sao Paulo, and Rome—as well as the addition of more double-header events at existing stops.

The 2017/2018 series begins on Dec 2 in Hong Kong—for the fourth year in a row—continuing into Asia’s first Formula E double-header event with an event on Dec 3. The series will feature its penultimate event in New York, featuring the iconic backdrops of the city and the river, with the series concluding in Montreal on July 28th and 29th. These new stops show that Formula E is growing—with the South American cities introducing the continent to the series—and will more than likely continue to do so.

At the Detroit Auto Show in January of this year, Volkswagen showcased an all-electric Microbus concept called the ‘I.D. Buzz’ concept, and in an interview with the U.K.’s Auto Express VW board member Herbert Diess seemed to confirmed production of the concept. Speaking of the Beetle he said, “Emotional cars are very important for the brand. […] We will also have the Microbus that we showed, which we have recently decided we will build”. This reveal during the interview was certainly unequivocal, and will certainly be well received by VW Microbus fans.

Not much is known beyond what the concept showed us. The vehicle will be built on VW’s corporate EV structure, MEB, and should be large enough to feature 200+ miles of range in the batteries it can store. The Microbus is almost certainly slotted for the US market, not only because there is a strong Microbus culture here, but also because VW agreed in its Dieselgate settlement with the EPA to invest billions in EV’s in America.

Look for more details in the coming months.

Civic Chief engineer revealed yesterday in an interview with Automotive News that Honda is considering expanding the Civic Type-R line-up with more individual models. He said, “We’re hoping that by gradually putting out more [variants] that we’ll be able to maintain a more stable sales volume”. This sounds smart, and he continued to hint that a more powerful version could be first, followed by a softer “grand tour” model, with an AWD model not off the table, so as to compete with the Subaru STI and VW’s Golf R.

Matsumoto also said the first Civic Type-R was very specifically set-up how it is—FWD, manual, powerful—to conform with the ‘Type-R’ familiar so familiar and beloved by enthusiasts and fans. Considering the hype the Type-R generated around the world, it certainly worked. Look for updated variants in the coming years.

The mechanical details of the new 10th-generation 2018 Honda Accord have been generally known about for a while now, as I have reported before, but Honda has announced the cars full reveal to be July 14th at 11am Eastern time. At this point, Honda will reveal what they have dubbed “the most fun-to-drive, premium and dramatically styled Accord ever” to the world, with sales commencing at a later time. If you cannot attend the Detroit-based reveal, Honda is livestreaming the event on YouTube at THIS address.

Stay tuned until July 14th for more Accord news.