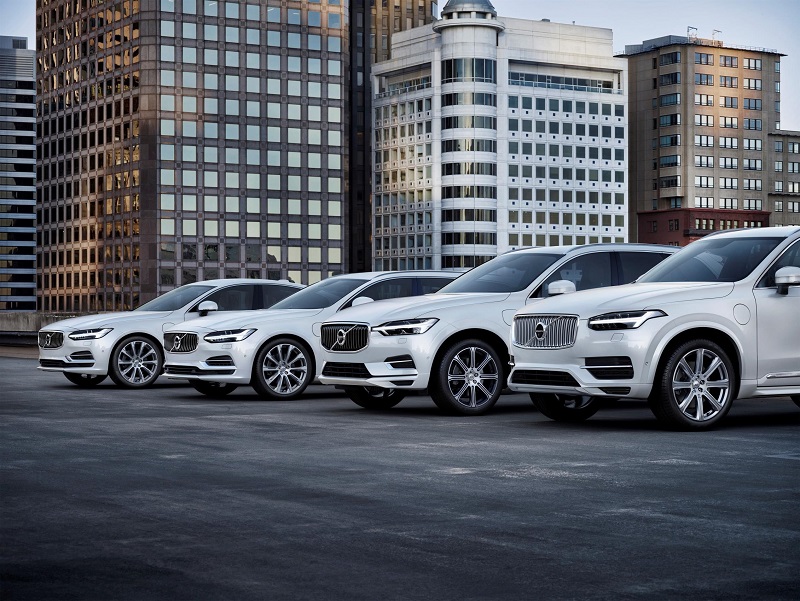 Volvo is planning to enter the premium small SUV segment for the first time later this year, with their introduction of the first XC40. Designed to compete with SUV’s like Audi’s Q3, the XC40 has not yet been revealed, although that is to come “shortly”. What has been teased, is the plethora of customization and personalization choices available to owners. Robin Page, Senior Vice President Design at Volvo Cars said, “Our customer research clearly showed that for the XC40 and for this segment, we needed a wider selection of colours and materials than we usually offer. As Volvo Cars has never designed a car like the XC40 before, we could start from scratch and give it energy and playfulness”. While nothing has been shown in detail today (teaser image above), they did announce that the exterior will be available in a monochromatic color option, as well as a dual-tone color option. Interior options will include exciting choices such as ‘Lava Orange’ carpet and ‘Oxide Red’ upholstery.

Look for the new XC40 later this year.

Nissan ProPilot Assist Coming to the US

Nissan showed journalists its new ProPilot Assist ‘Hands-On’ driving assistance program this weekend, putting the system on public roads in operating conditions for the first time in the US. The ProPilot Assist program is a ‘Hands-On’ driving assistance program as opposed to a ‘Hands-Free’ system like Tesla’s Autopilot, requiring the drivers hands to be firmly on the wheel during operation. The system—which was designed specifically for US drivers on US roads—is designed to ease the burden of driving through technological aids, rather than take over the entire burden of driving itself. These aids are a development of the now-standard lane-keeping assist and automatic cruise control, and can enter ProPilot Assist mode in a single lane situation. In this mode, the automatic cruise control not only keeps a set distance between the car in front, as well as maintaining a maximum speed, it can come to a complete stop and set off on its own again. This development of stop-and-go capability will be the most noticed effect of ProPilot Assist mode, as the other aspect of the mode is a slightly active lane-keep assist, aiding the driver stay centered through actual resistance and movement of the wheel, rather than simple warnings to the driver.

The ProPilot Assist mode will become available on Nissans later this year.

While we continue to (im)patiently wait for the ZR1 halo-‘Vette, Chevrolet has rolled out a host of mild updates and upgrades for the Stingray and Z06 Corvette’s already available. Both models now offer more choices to customers when it comes to selecting interior and exterior color schemes, as well as a higher resolution backup camera. Woohoo! Slightly more exciting, the Stingray has been given larger-diameter wheels as standard, rising from 18in in the front and 19in in the rear, to 19in in the front and 20in in the rear. For those who want a different wheel, the Stingray now has five new wheel sets to choose from. Chevrolet’s Magnetic Ride Control adaptive suspension is now a standalone option, rather than being rolled into the Z51 performance package or various other appearance packages. The Z06 also gets new wheel choices, as well as an improved available Performance Data Recorder.

Bugatti Chiron Successor “Seems Certain” to be a Hybrid

In an interview with the U.K.’s Autocar magazine, Bugatti CEO Wolfgang Dürheimer discussed the Chiron replacement, although immediately noting that it was a long way off and had not yet entered development. “Electrification will happen,” Dürheimer told Autocar. “The next car is a long way from being developed, but the way battery and electric motor technology is moving on, as well as regulations, it seems certain that the next car will be electrified in some way.” Given that parent company Volkswagen’s government-mandated future is with electric cars, this should come as no surprise, although if we look at the Veyron’s life-cycle, the Chiron still has a long way to go. The only confirmation Autocar received from Dürheimer was that the next Bugatti would not be a full-electric car.

Thank goodness for that.