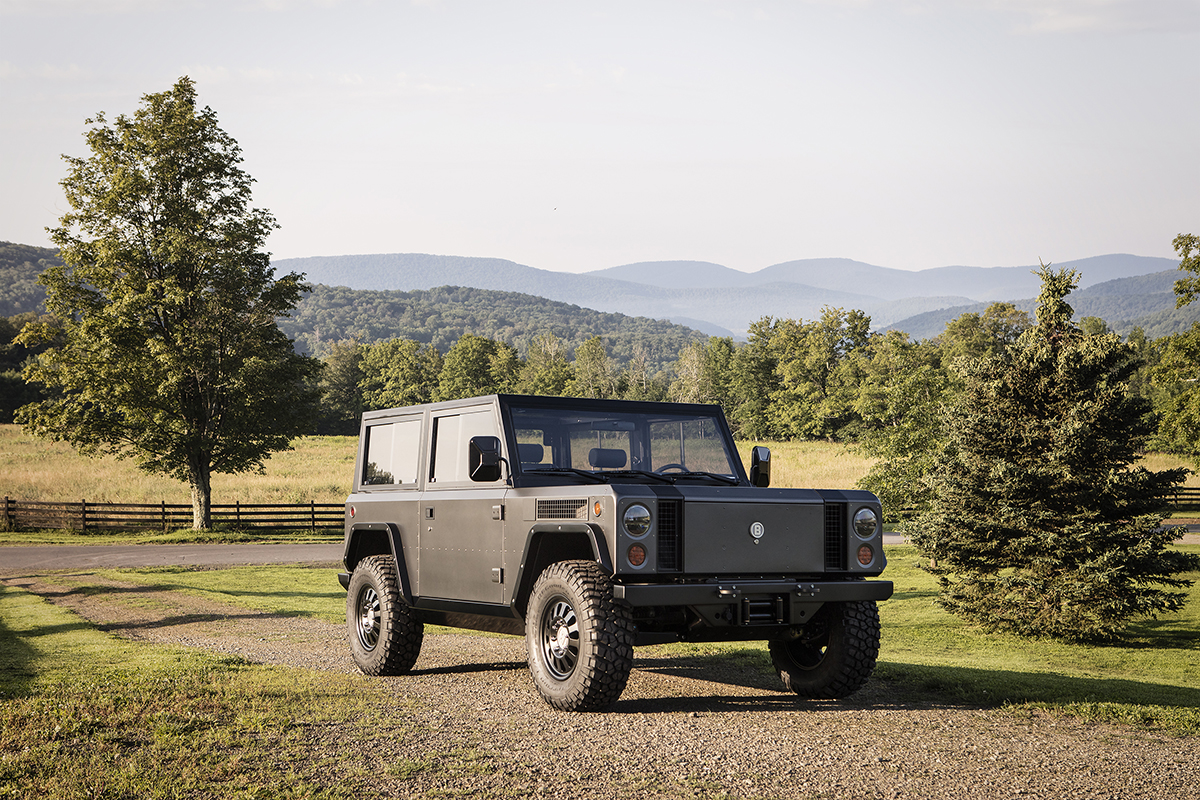 The Classic Car Club of Manhattan hosted the unveiling party this weekend for the world’s first clean-sheet design EV on-road/off-road vehicle, the Bollinger B1. Pictured above and in the header, the B1 adopts a classic ‘three-box’ design supported by meaty off-road tires, a look that is hoped will appeal to both the new-school and old-school off-roader. As the focal point is the electric powertrain, it is important that it is suitable for both a modern on-road situation, as well as a likely off-road situation. Two battery packs will be offered at start, in the form of a 60kw ‘base’ pack and a top-trim 100kw version. The 60kw pack offers 120 miles of range while the 100kw is said to offer 200 miles of range. No matter the battery pack, both of the axles are powered by an electric motor, producing a combined output of 360hp and 472lb-ft of torque. This power is delivered to each wheel through a geared-hub, much like the 4×4², enabling a best-in-class 15.5 inches of wheel travel, which can be further enhanced via the hydro-pneumatic suspension. 8-lug wheels wrapped in off-road rubber ensure that all of that capability can be used.

The vehicle weighs 3900lbs and is capable of towing up to 6100lbs. On top of this utility, the vehicle features the EV-standard ‘Frunk’ front-trunk. Bollinger has included a front and rear pass-through panel which enables objects as long as 12ft to be fully enclosed in the vehicle, as demonstrated in the picture above. The rest of the interior is rather utilitarian, featuring various off-road radios and such. Supporting all of this is a lightweight aluminum frame, with a steel rollover structure, ensuring the truck can withstand the off-road abuse. The limited range and lack of charging options on trails mean that the B1 is more of an afternoon off-roader, rather than an expedition vehicle. The charging is taking care of by a J1772 universal connector for conventional 110V and 220V charging while Level 3 “DC Fast” charging is completed through a CHAdeMO protocol charge port on the vehicle’s fender. The battery pack compartments are encased in four layers of protection between metal casings and water tight seals which are engineered to withstand submersion under 3.3ft of water for 30 minutes, which is the industry standard for EVs.

Deliveries are intended to begin in 19 months, with a Tesla-like $1000 deposit ensuring your delivery. Deposits will be taken starting in 2018.

Tesla is not shy about letting people know how it’s Model 3 is going, and the most recent public milestone occurred as the company delivered the first 30 production Model 3’s to customers who deposited the $1000. While most of these individuals worked Tesla, this is merely the first step on the companies way to producing and delivering upwards of 100,000 cars a month. While these next six months may be a ‘Production Hell’ for Tesla as they seek to fulfill the more than half a million pre-orders, if they succeed, Elon Musk will have achieved his goal of a mass-market electric car.

Stay tuned over the next six months for any ‘hiccups’ that could interrupt Mr. Musk’s goals for production.

Ferrari’s of the past had reputations of reliability which were less than stellar, and as Ferrari has slowly become more corporate, they have looked to change this image in their customers eyes. One ‘insurance’ they have offered their customers is steadily increasing-in-length warranties for both new-purchase cars and qualifying second-hand vehicles. While the 12 year optional warranty was industry-leading among supercars—a 2018 could 488 Spyder could be warrantied until 2030, which is crazy—Ferrari has upped their own game, offering 1-year extensions on their warranties, to a maximum of three more years, totaling a lengthy-seeming 15 years. These extra months of peace-of-mind don’t come cheap, at $4500 for V8 models and $5760 for V12 models, however both of those price tags are significantly less than that of a new engine. This new program is called NewPower15, and every Ferrari owner everywhere should pay for it.

Talking to Reuters, Cadillac CEO Johan de Nysschen said that the majority of its sedan lineup—the ATS, CTS, and XTS—would not be directly replaced, instead replaced by a new car called the CT5 and an updated CT6. Reducing Cadillac’s sedan offerings from four to two makes sense, as the market shifts away from sedans and more towards crossovers and SUV’s. Broadly speaking, he described how the CT5 would appeal to buyers in the $35,000-$45,000 bracket while the CT6 would be fit for anyone looking to spend $45,000 and up. In a statement to Road & Track, a Cadillac spokesperson clarified the situation with the following statement;

“The Cadillac future product plan remains unchanged. Today, Cadillac has three large sedans (XTS, CTS and CT6) in the same segment, plus the mid-sized ATS. As the current ATS, CTS and XTS run their natural course until the end of their planned life-cycle, we will introduce two completely new sedans, positioned in different segments and clearly differentiated by size and price while exhibiting the latest evolution of the Cadillac design language. The Cadillac CT6 forms a very important part of our long-term product strategy and we will expand the line up through the introduction of additional engine variants in the future. We are working to balance our product portfolio to reflect luxury market demands. The Cadillac product offensive, aimed at significant expansion and renewal of the portfolio, will begin with the launch of the XT4 crossover in 2018.”

It does seem that this confirms Nysschen’s statement. The “two new sedans” would of course be the CT5 and the new CT6.

After nearly 30 years, Target is leaving the world of motorsports. To those familiar with the story behind Targets entry into motorsports, this does not come as a surprise, so a brief history lesson: In 1990 Chip Ganassi was building an IndyCar venture and needed a major sponsor to make his life easy. Luckily for him, Mr. Ganassi was friends with Target’s CEO and voila a partnership was born. In 2002, this partnership expanded to include a NASCAR team, also under Ganassi’s name. However, in 2014 Target got a new CEO and Chip wasn’t buds with him as much as with the previous one. The same year, his IndyCar budget went from one car to two, with the Target sponsorship fully exiting IndyCar in 2016. Target has remained with NASCAR up until this point, wholly due to contractual obligations.

Those contracts are now expiring, and Target has announced their departure from Kyle Larson’s NASCAR Monster Energy Cup Car. It is unfortunate to see Target leave, but both ventures were successful enough to not have trouble finding replacement sponsors. Targets money is not leaving the world of sports, as they are looking to invest in soccer in America, which is probably a smart considering my city—among others—is building a new soccer stadium.

Sauber F1 Saying ‘No’ to Honda 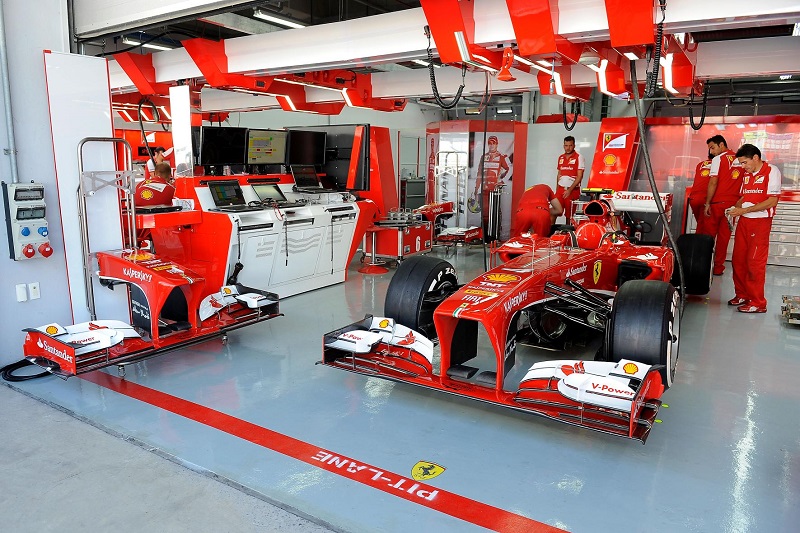 Sauber Formula 1 has had an interesting year, as they announced their desire to move to Honda power for the 2018 season at the beginning of this season. The poor performance of the Honda unit as well as the then-CEO’s dedication to the Honda deal led to some contention among team leadership, ultimately resulting in the termination of Monisha Kaltenborn. Ms. Kaltenborn believed sticking with Honda, and providing a second set of data points to develop off of, would provide Sauber with a fast-track to a newly developed competitive engine from Honda. The rest of the board seems not to have agreed with this, as new-CEO Frederic Vasseur announced officially that the team will not be continuing forward with Honda, instead sticking with their current supplier of engines, Ferrari.

This deal makes a lot of sense as it leaves Sauber with a known quantity in their engine and supplier, while taking a step back from a Honda unit which can charitably be described as “plagued with issues”. Charitably.

As rumors suggested at the end of last week, Porsche has confirmed it is joining Formula E for the 2019 season as a competing team. In doing so, Porsche Motorsports is ‘realigning’ its motorsports efforts, leaving LMP1 racing to focus on Formula E. Porsche will not be leaving FIA-sanctioned GT racing altogether, as its 911 RSR cars will still be campaigned in the GT class of the FIA World Endurance Championship. In addition to races such as the IMSA WeatherTech SportsCar Championship, this means the RSR will be competing in the 24hr race at LeMans. The LMP1 team—drivers, developers, and engineers—will be kept in employ, as Porsche looks for alternate venues for their skills. This shift of energy represents Porsches corporate shift towards electrification of their lineup.

Look for Formula E to grow in 2019 as more teams join.