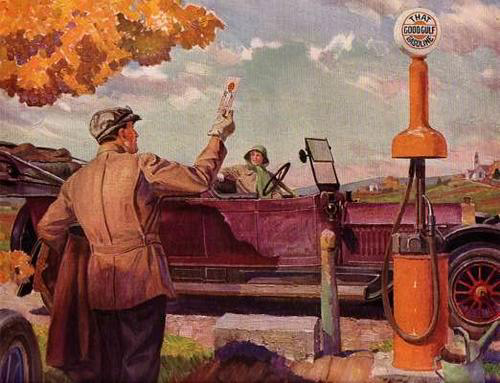 A few weeks ago, I wrote an article on early gauge technology in automobiles; it was simple to say the least. This week, I am again looking at the history of a gauge, this time one that seems rather necessary for vehicular operation; the fuel gauge. As it turns out, the gauge is necessary for consistent operation of motor vehicles, and as such, the history is rather short: they had to figure it out rather quickly.

As proof that our motoring-forefathers had bigger ‘Cojones’ than we do currently, early automobiles didn’t have gauges or signals of any kind, let alone something as pansy as a fuel gauge. With open top cars and wooden wheels, speedometers consisted of how fast you could go without crashing, and signaling consisted of a vigorous shout, and potentially a blat from an air horn if you were so inclined to install one on your car. Measuring things such as oil pressure, coolant temperature, and fuel level were either not possible, or extraordinarily primitive. As this quick look at the early methods of fuel measurement will show you, this certainly falls under the banner of ‘primitive’.

Initially, measuring a gas tanks fuel level was as simple a solution you could think of: you stuck a stick in and measured how much of it got wet. As cars gained traction, a more formal solution had to be thought up, and so car manufacturers and petrol stations began producing rulers designed specifically to measure a cars fuel level. As these were not sold with the car, not every motorist had their own ruler, and as each fuel tank was shaped differently, fuel stations tended to stock commonly used rulers to perfectly measure a cars fuel level. If a specifically designed ruler was not available for that particular fuel tank, then the volume of the liquid in the tank would be given in inches, and either maths would be had, or—more likely—the driver would ‘guess-timate’ how much fuel they had left.

As more manufacturers gained entry into the market, and the automobile became more commonplace, having a gas-soaked piece of wood laying around seemed like less-and-less of a good idea. As such, gauges soon began to come to the market, with the first dash-mounted fuel gauge—mechanical, not electrical—that we would recognize being introduced on the 1914 Studebaker. Before then, a device may have come to market in the aftermarket realm, which also measured fuel level; the windshield mounted gas gauge. I have not been able to find any further information on it, besides a mention by Jay Leno on Jay Leno’s Garage, and as such, I couldn’t find a picture either. As it is Mr. Leno though, I trust that it existed, as the logic of the description he provided also insists.

Essentially, the device sounds like it acted as an IV drip from your fuel tank to your carburetor, via the addition of a glass bottle mounted about eye level on the A-pillar next to the driver. This glass bottle would contain a known amount of fuel—let’s say a gallon—and would be fed so as to maintain roughly the same amount at all times in the bottle. A driver could glance over and know that as long as there was fuel dripping next to his head, he had gas in the tank behind him. When the dripping stop, the glass bottle then became the last amount of fuel available to the engine, which must have been pretty nerve-wracking to watch if you were not near the sparse service stations of the time.

Again, I couldn’t find much on such a device, but it sounds like it existed, and I sincerely hope it did, because it makes a great story. Going back to Studebaker, their dash-mounted system would start a trend that wouldn’t become common-place until the 1930’s. In the meantime, most cars utilized an aftermarket solution that will be familiar to some motorcycle owners: the mechanical fuel gauge. Consisting of a replacement fuel cap with a gauge connected to a float, the decreasing level of fuel in the tank will lower the float—usually cork—and likewise lower the fuel gauge. An obvious flaw to this system is the inability for a driver to check their fuel on the move, as most fuel-filler caps were—and still are—located on the rear of the vehicle.

While some companies followed Studebakers example, and provided their customers with a mechanical fuel gauge as standard, most companies still left the gas measuring up to their customers. Again, many customers utilized the aftermarket cap-and-float system, but a good percentage made do with a ruler, maths, and a bit of hope. It was not until 1925, when Rickenbacker offered the first electrical fuel gauge, that the convince and reliability of the device—and the automobile in general—reached the point that it started to become commonplace. Rickenbacker’s device was very primitive, and was push-button operated: the driver pressed a button, closing a circuit, displaying the fuel level while the button is depressed. In the 1930s these became automated, and started coming standard on cars.

My takeaway from my efforts to learn about fuel gauges I simple: thank the powers that be that I don’t have to drive around with a glass jar of fuel next to my head everywhere I go.

Enjoy the article? Share it with your friends and let me know by hitting the like button. Comments and questions below will always be answered.