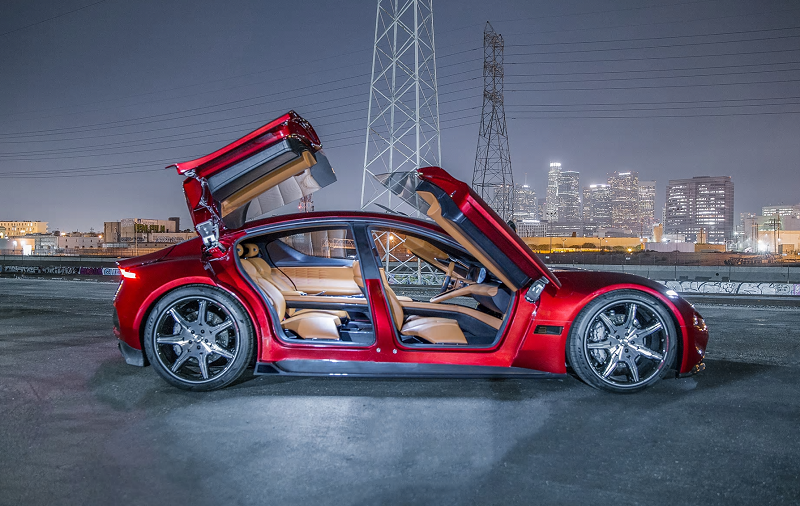 Talented car designer Henrik Fisker is a very optimistic guy. After the failure of his Fisker Karma luxo-eco car, he began teasing of a follow-up vehicle, designed in the same eco-luxo mentality as the Karma.

Henrik was very tight lipped. All we knew about the car was that it would be a luxury EV with suicide butterfly doors, a strange (striking?) visual design, and quick-charge solid-state battery technology. Eventually, he revealed it was called the EMotion..

Now, Henrik has revealed his new creation, and it does indeed stick close to the stats he has teased so far. Featuring almost a Tesla-like swooping shape, the nose of the car is dominated by a front-mounted LIDAR unit and a thin set of headlights.

The doors, fully open in the second picture, are certainly a gimmick to grab headlines like the Tesla Falcon Wing doors. I really, really, don’t care, because look at them.

Whereas the Tesla was designed with a modicum of mass-production in mind, thus making the doors a silly idea, the EMotion is a luxury, exotic car, through and through. This means the doors can be taken at face value: a really cool, really useless feature. Keep em.

Inside the EMotion is simply designed, with seating for five. Almost completely swathed in leather, the Fisker looks like a nice place to be. The rear can be made even nicer with the planned Chauffeur Edition EMotion, which comes with no front passenger seat and a 27in monitor in its place for the rear-seat occupants.

Structurally, the EMotion uses aluminum and carbon fiber to keep the weight low. While the car will be equipped with an LG-supplied lithium-ion battery at launch, Fisker promises a solid-state battery is on the way. Range is near 400 miles, yet further details on the electric motors are not forthcoming.

Fisker says the EMotion will be built in the US at an undisclosed factory, later this year. Production is expected to begin at the end of next year, with pricing starting at just under $130,000.

MINI parent company BMW does not waste any time. Hardly 10 days into 2018, and the company is already busy announcing their 2019 models for the MINI brand. In the US market, the most prominent change is the switch to the company’s new logo, as well as an extra dash of ‘British-ness’ to the cars announced, the MINI Hardtop 2-door and 4-door, as well as the MINI Convertible.

This extra English character is added to the car through blatant use of British stereotypes. Not only are the normal Union Jack mirror covers and roof decals available, now ever MINI comes equipped with LED rear lights in the shape of a Union Jack.

Am I the only one who thinks that is kind of gross?

On top of this standard Union Jack, a whole world of custom options is now open to MINI owners, through the ‘MINI Yours Customized’ program. Using 3D printing technology, the program will include side scuttles, decorative strips for the interior, and LED lights and projectors.

Created using an online customers, customers now have a way to waste their money with infinite variety.

Beyond these visual changes, the car also has received various standard upgrades, such as a 6.5in infotainment system, Bluetooth as standard, and optional wireless device charging.

The 2019 MINI is on sale with deliveries beginning in March