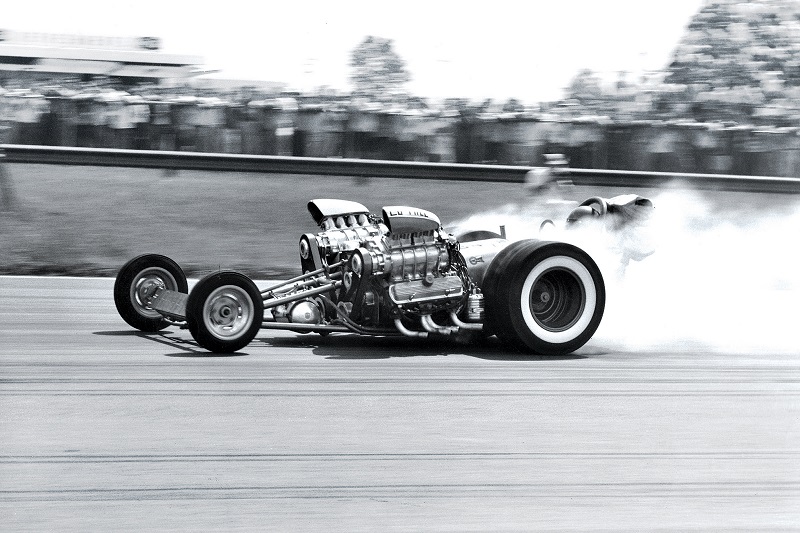 Money, food, fun. In America, we love all of that, just like the rest of the world. Perhaps a bit more than the rest of the world, however, we tend to believe that there is always more to be had. More is better. More is best. In the car world, this certainly applies, and today, seeing modified cars passing the four-digit mark is not uncommon.

In the past, getting more power wasn’t as simple as it seems to be today, and people had to be real inventive to go faster. After World War II, the influx of GI money and technical know-how to the car scene led to the greatest period of automotive backyard inventiveness–which hasn’t really stopped to this day. It didn’t take too long before someone got tired of eeking out bits and bobs of power from their single motor, before they put a second one in their car. While there have been lots of people–and even some companies–which had this idea, below are simply my favorite throughout history.

It should come as no surprise that the dual-engine effort was led by American Hot Rodders of the 50’s and 60’s. One of the most famous, and earliest, twin-engine dragsters was the purpose-built “Bustle Bomb”, built by Lloyd “Scotty” Scott. Nothing about the Bustle Bomb was conventional, as the car featured a tubular space frame chassis, a relatively uncommon practice at the time. To fill their chassis, the racing team behind the bomb took two engines that were lying around and put them to work. The front engine was an Olds V8 run through a Ford transmission to the rear, while the rear engine was a Cadillac V8 with a simple 1:1 direct drive going into the rear as well.

This crazy machine rolled off the trailer in Santa Ana at their drag way, broke a few records, and just kept on breaking them through the next few years. One of the most significant records was at a drag event in Ohio in 1955. Before this event, there was a myth that 150mph and beyond simply wasn’t attainable in the quarter-mile. The Bustle Bomb shattered this record on their first run of the day attaining 151.07mph. While the Bomb would go on for a bit, this opened the floodgates for twin-engine cars.

There are simply too many cars to detail individually, or even to list briefly, so instead I will focus on another branch of twin-engine cars. Most of the cars were like the Bustle Bomb, being purpose-built, custom-framed drag cars. Lucky for us, there are always crazy people, and a few factory-bodied cars got mutated into twin-engine monsters. While the most famous is the Hurst “Hairy” Olds my favorite is the much less professional, way sketchier Terrifying Toronado built by John Smyser.

Smyser took the idea of the Hairy Olds, built it in his garage, and turned it up to 11 while he was at it. The innovative front-wheel drive layout of the Toronado was simply duplicated in the rear, with both ends having their own engine and transmission. Smyser transplanted dual 425cui Oldsmobile V8 engines, put superchargers on them, and made a claimed 2,400 hp out of the set-up. This may be believable, as both times he took it out, it crashed spectacularly, before eventually destroying itself.

Americans weren’t the only one’s tooling away on their cars in the search of speed, as the British were similarly inventive with their own cars. A particular favorite to modify was Alec Issigonis’ Mini, which was light, nimble, and slow. There was only so much that could be done to a Mini motor, and just like in America, it did not take long for people to begin transplanting a second motor into their Mini.

One of the first to think to perform the transplant was Paul Emery, who built a rear/front AWD Mini in the early 60’s. While he couldn’t quite get it to work–he said it was crap but handled well with great traction-he certainly lit the fire of creation in other’s minds.

One of these ‘other’s’ was Mini creator Alec Issigonis, who turned to a second Mini motor to power a prototype of his Mini-based Moke off-roader, pictured above. To increase weight distribution, traction, and power for his Moke off-road concept–as well as giving it AWD–Issigonis put a second Mini motor in the rear. While successful, it was determined that a simple configuration was better for the Moke.

The most successful classic Twini effort was John Cooper’s, pictured at top. Bewitched by the idea of a twin-engine Mini, Cooper built one and successfully entered it into the Targa Florio race, earning 27th place while finishing. His efforts ended there as the car nearly took his life while he was driving it on public UK roads. In the process, the car burned to the ground. Many recreations and private efforts have been modeled after Cooper’s.

Modern Mini’s haven’t escaped the Twini craze either, as a San Francisco-based builder, Bay Bridge Bimmer, built and raced a modern, dual supercharged 4-cylinder-powered mini. This gave it AWD and lots of power. For more on this Mini, watch Jay Leno talk about it below:

Gave it a Shot: Mosler TwinStar

Another modern effort was produced by the American tuning company Mosler. Based on a 2000 Cadillac Eldorado, it seems like Mosler looked at the body, and thought, “Hey, it looks like an engine could fit back there”. After that, Mosler did exactly that, putting another Cadillac engine and transmission in the rear.

The setup worked surprisingly well, as the stock V8 and 4-speed–with 290hp–could power the front wheels, while a similar set-up–00hp V8 with a 4-speed–could power the rear. These operated independently of one another, with the powerbands and shift-points matching up sufficiently for the company to apparently sell 6.

If you are curious, keep your eyes peeled, because they will occasionally come up for sale in the neighborhood of $40,000.

At the end of the 20th century, the Germans decided to go a little crazy, and join the dual-engine fun. Taking their parent company’s diminutive A190, which was a 125hp 4-cylinder FWD car with a wonky-shaped engine, AMG did the age-old alchemy and shoved another engine in the rear, to power those wheels. Since 190+190 is 380, the A38 AMG was born.

With almost 300hp and AWD the tiny chassis was overwhelmed. AMG did their best, reinforcing and widening what they could, and giving it the mighty brakes from the E55 saloon at the time, but apparently, it was still an unwieldy beast. Despite this, the sheer insanity of the AMG creation is too great to overlook.