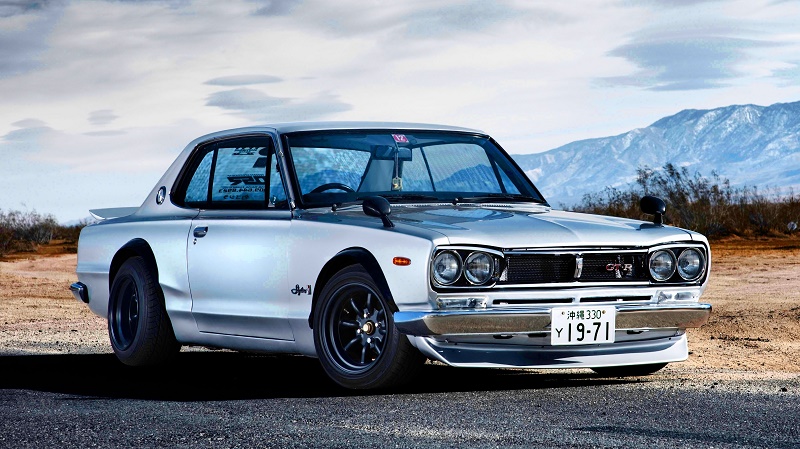 Over the next four weeks, Monday’s History Hits will be transformed into a mini-series detailing some of the cars I most desire. Dubbed the “History Hits: Dream Car Edition”, the series will travel across the globe region by region. Only looking at cars 25 years or older, this week’s History Hit will begin in Japan. The following weeks will travel West, looking at my dream American, European, and Soviet region cars, with Britain being included as part of Europe.

But none of that matters geo-political mumbo-jumbo matters, because this week we are busy on the other side of the globe. While the Japanese are not often thought of when classic cars are mentioned, as the years go on, more and more cars will enter the ‘classic’ realm. While the Toyota 2000GT is a classy choice, it is obvious, although it could be argued my choice is no less so. I want Godzilla’s ancestor, the iguana that would mutate into a monster. While the R32 Skyline GT-R of Gran Turismo fame may have been the first to be dubbed Godzilla, it was by no means the first successful racer to wear the GT-R badge.

That honor goes to the second (or third, depending on the automotive genealogy followed) generation of the Skyline model line produced from 1969-1972. Initially only offered as a sedan—chassis code PGC10—the GT-R was a race-homologation car for the street. While the sedan is a capable performer, and quite the looker, it is not the topic of my dreams: that honor goes to the coupe introduced in 1971, with the chassis code KPGC10.

The coupe was similar to the sedan, being identical in terms of their mechanical bits, however the coupe is slightly shorter. With 2.8in cut out of the wheelbase, the proportions are changed, and the addition of a ducktail spoiler and front splitter complete the sporty look. To me, the 1971 and 1972 Skyline GT-R coupes have a timeless sporty look, maintaining a presence throughout the years. The flared wheel arches seal the deal: even the average pleb can tell that something may be afoot.

Like any good sports car, that ‘something’ is more than just the engine, although the GT-R features a fine unit. Plucked from Prince race cars from a few years earlier, the six-cylinder engine in the GT-R, dubbed the S20 engine, was a special engine indeed. Despite having six-cylinders, the engine was a very small displacement unit, displacing 2.0 liters. This powerplant produced 160hp all the way at its redline of 7000rpm. Slightly earlier, at 5600rpm, the engine produces a peak torque number of 130lb-ft.

While these numbers may not sound impressive, considering this was achieved 50 years ago, and the car weighed only 1.1 tons, the power produced was more than sufficient. The engine was fed by three Weber carburetors, which aided in the high revving nature of the motor—it is rumored that race-prepped units similarly equipped could rev all the way to 8000rpm, producing over 200hp on the way. This power was delivered to the rear wheels through a 5-speed manual transmission.

As I said earlier, a great car is more than just a single part like an engine, and the GT-R is no exception. The rest of the car was breathed on to go along with the sporty engine and transmission choices. The already mentioned wheel arches and front/rear spoilers improve the sporty appearance of the car, while the altered suspension geometry—evident in the lowness of the cars—completes the package.

Sadly, this package is a rare one indeed. Adding up total production numbers—coupes and sedans—a depressingly small number of 1945 vehicles is reached. As every car has an attrition rate, this number is no doubt much, much smaller. Split the survivors further between coupes and sedans, and my dream hakosuka GT-R is even less attainable.

Does this matter? Of course not. Dream cars are fun despite the fact that they often remain dreams. I shall consider it aspirational. Have any questions about the hakosuka? Ask down below and don’t forget to like and share the article with your friends. Check back over the next three Mondays for my favorite American, European/British, and Soviet cars. They are good ones!