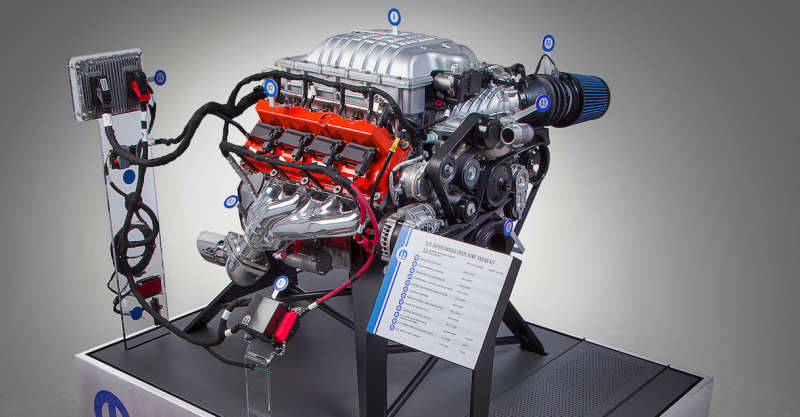 Today, I have decided to write an article to remind gearheads that they have a reason to rejoice, for luckily for us, some blessed car makers know that sometimes, you want to do what you want to do, and are willing to sell you a complete engine, all by its lonesome, ready for implantation in some lucky engine bay. Below is the list of engines that you can buy from a manufacturer in mostly turn-key configuration, otherwise known as ‘crate engines’.

First, though, why would you want a crate engine? When you begin building a hot rod, dragster, off roader, or other purpose-built vehicles, you will want a crate engine. While it is true that re-purposed engines can be found online, and junkyards are full of motors waiting to be rebuilt, in high-performance sporting applications like those stated previously it is best to know the complete history of the engine. Starting from 0 miles with a performance-built engine is much better than building an engine for high-performance application with an unknown 140k miles of wear on it from a previous owner.

For real performance cars and race cars, crate engines are the way to go. Without further ado, and in no particular order, the manufacturers that will sell you an engine, and what that engine is:

When it comes to offering crate engines, no manufacturer even comes close to Chevrolet. Going to the performance section of their website, shoppers can find 69 different engines or versions of engines available for purchase. The company offers so many different engines due to the long-standing practice of shoving small-block V8’s into places they were never meant to be, and as such the company offers all 3 generations of the legendary Chevrolet small block; the original 350, the last generation LS, and the current generation LT.

On top of their small block V8’s the company still offers their big block V8 engines, because ‘Murica. In fact, it is one of these big blocks, the ZZ572/720R Deluxe, which is the most powerful crate engine Chevrolet offers. This naturally aspirated, 572 cubic inch engine produces 720 HP, and can power most strip cars down the quarter mile in the 9-second range. To put that in perspective, 572 cubic inches equates to 9.37 liters—let’s say 9.4 liters. Woah. 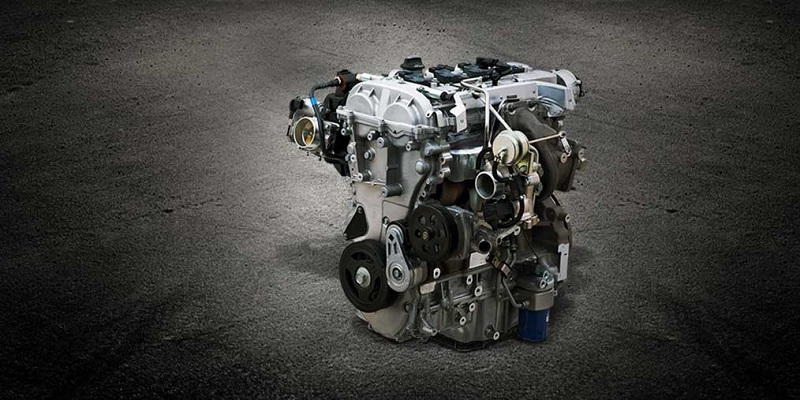 It is not all about the V8 from the world of Chevrolet crate engines, as the 2.0L turbocharged engine on offer in the Chevrolet Camaro and Cadillac ATS is available for sale. While available, I cannot help but feel the V8’s are more popular. 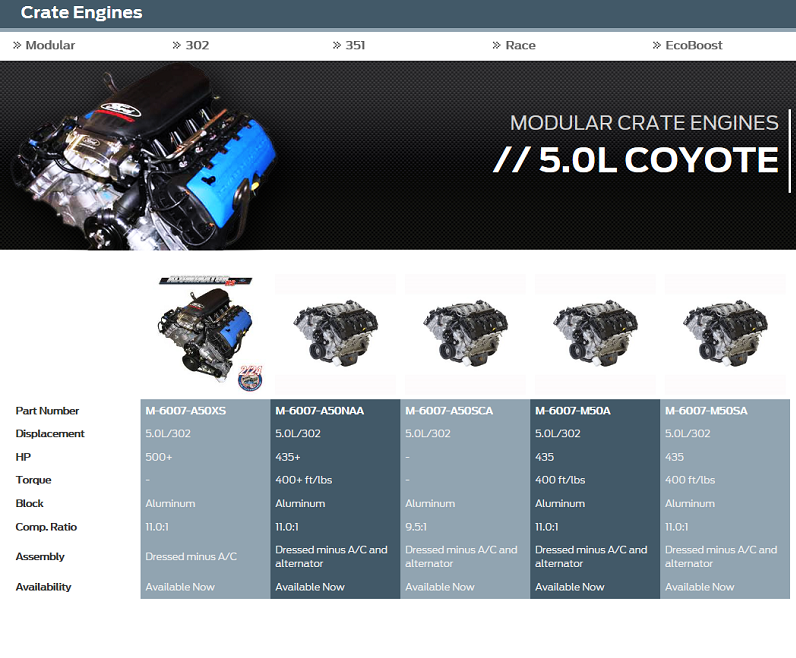 While not as prolific as Chevrolet in their offerings of V8’s, Ford actually offers more variety in their crate engine department, also found on the performance section of their website. While Chevrolet offers a single turbocharged engine, Ford offers three from their EcoBoost line of engines; a single V6 and two I-4’s.

Those looking for a V8 are offered three general choices: either a modern or ‘classic’ 5.0L V8 or a big, 7.0L small-block based engine. The 5.0L powerplants come from the Mustang, with the modern iteration’s ‘Coyote’ DOHC engine—pictured at the top of this section—and the Fox Body Mustang’s cam-in-block pushrod 5.0L providing the basis for the two powerplants. While based on their road-going counterparts, Ford builds all of its crate engines to a higher specification than mainstream applications, utilizing what they call the ‘BOSS’ block for the basis of each engine.

Now, it seems that Mopar has seen the light, as they have begun to offer the 6.2L supercharged HEMI V8 out of the Hellcat line of vehicles in a turn-key purchasable crate. This crate engine, dubbed the Hellcrate, will surely be popular in years to come, as 707hp is achieved effortlessly with the engine.

Hopefully this means the brand will begin to offer their other engines for sale, such as the 5.7L/6.4L aluminum V8 twins or the iron-block 6.1L SRT block.

While Cummins may seem like an odd addition to this list, the diesel powerplant company has a long tradition of offering crate engines, with their older 6-cylinder turbo-diesel being the last engine for sale. Now, Cummins has brought an entirely new engine to the table, with their introduction of the R2.8 Turbo Diesel. This 2.8L I-4 turbo diesel produces 161 hp @ 3600RPM and 267 lb-ft @1500-3000 RPM and can fit in a variety of engine bays. It is also the only crate diesel engine available beyond Banks Power 630T engine, which is similar to the RAM EcoDiesel engine.

The company also has another crate engine coming soon, more than likely being the 5.0L diesel found in the Nissan Titan pick-up truck.

Honda is another newcomer to the crate engine scene in America, as they have only offered their racing engines for non-US sale. Now, just as America has received our first Civic Type-R, we are receiving the engine from the car as a crate engine. This 2.0L turbocharged engine produces 306hp, and is designated K20C1. Unfortunately, this engine does come with a caveat, as the engine is only available for official motorsport use.

I was hesitant about including this on the list, as it is uncertain if Hyundai is still offering crate engines at their dealers. Early in the 2010’s, Hyundai attempted to connect to the tuner market by offering two crate engines; their 2.0L turbo four cylinder and 3.8L V6 found in the Genesis Coupe.

As the Genesis Coupe is no longer a thing, and the 2.0L hasn’t been a thing for a long time, I doubt Hyundai will themselves sell you an engine, however some dealers may still have an inventory, warranting its inclusion.

Think I missed any engines? Let me know down below and remember to like and share the article.