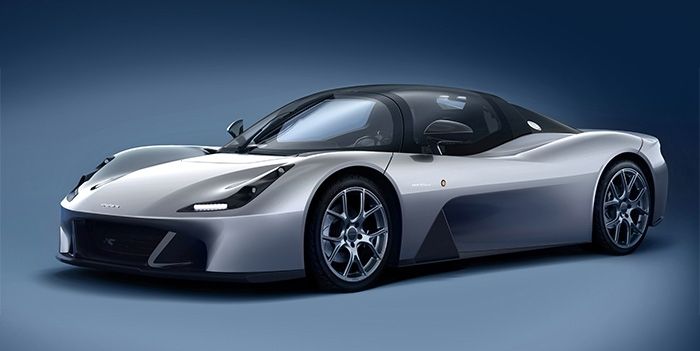 Dallara, the Italian manufacturing firm who makes race car chassis’ for cars like next years IndyCar, has gifted itself an 80th anniversary present with the announcement of plans to produce its first-ever road-going car. Dubbed the Dallara Stradale, the car will be a two-seat, mid-engine, carbon-fiber sports car powered by a Ford-sourced four-cylinder engine.

This engine, a 2.3L turbocharged four-cylinder sourced from the Mustang EcoBoost, has been turned up to 400hp, and sends power to the rear wheels through a six-speed manual or single-clutch paddle-shift automatic. The automatic comes with two shift maps: normal and sport.

With dry weight of just 1885 pounds, the Stradale will be capable of holding 2G of lateral acceleration when equipped with special Pirelli tires. For track-focused buyers, a rear wing will be available as well.

Production will be limited to 600 examples, and–surprisingly–two body styles will be offered. Buyers can choose their Dallara with either a roof and gull-wing doors or a ‘Barchetta’ model, without doors, a roof, or a windshield.

While US availability is unkown, potential buyers will have to plop down at least $183,000 for their chance to own the car, before options. The company plans to spread the release of the car over the next five years.

Tesla has unveiled their new Semi Truck at an LA event, livestreamed over  the internet. At this event, they revealed their new truck visually, as well as key stats surrounding the vehicle.

Mr. Musk, who presided over the show, made some large promises with his truck, namely about the profitability of his trucks. With a 500 mile range at max load and max speed, Tesla promises that the truck can operate under most businesses normal parameters, albeit better than a normal truck.

Accelerating to 0-60 in 20 seconds at max weight, the truck blitzes the traditional competition, and uses cheaper electricity all while doing it. Tesla estimates that most companies will see savings of 50% per mile over traditional trucks.

Orders are currently being accepted.

While electric Semi trucks are all fine and dandy, they don’t exactly have the ‘wow!’ factor of other, more sporting vehicles. Mr. Musk is aware of this, so at his Semi reveal last night, Mr. Musk also took the opportunity to debut the next-generation Roadster, which he wants to be the quickest car in the world.

The key word is ‘quick’ not ‘fast’, meaning that the Chiron and Venom F5 have their top speed records secure. The Tesla Roadster can *only* go 250mph flat out. However, quickness is not the top speed, but rather how quickly you can get there. Wherever ‘there’ happens to be, rest easy, because the Roadster can get there very quickly.

The stats: 0-60 is taken care of in 1.9 seconds, with 100mph coming in 4.2 seconds; the quarter mile whooshes by at 8.9 seconds, meaning Mr. Musk certainly will have the quickest production car if nothing changes. Fueling this speed is a 200 kWh battery pack, allowing a maximum range of 600 miles. That battery pack? It powers electric motors producing almost 7,400lb-ft of torque.

Release dates haven’t been announced but the base price will surely start around $200,000 with a $50,000 deposit being required. For a clean quarter of a million dollars, you can purchase a ‘Founders Series’ which surely comes with many stuffs and things.

Or you can refer 50 friends to purchasing a Model S and get a free Founders Series as one enterprising YouTuber did.