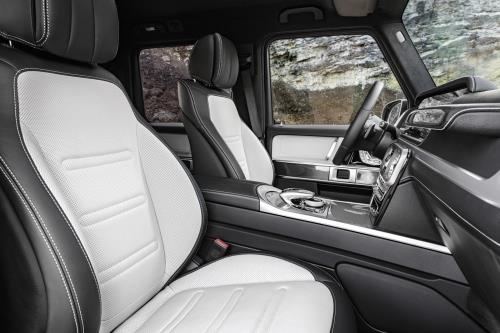 Since 1979, or for the past 39 years, Mercedes has been pawning off it’s military off-road vehicle on unsuspecting civilians of the world, in the form of the boxy G-Class. Over the years, rather than aging gracefully into retirement, the G-Class–or G-Wagen–has been given a pantsuit and a gold chain, and pushed out to pasture once more.

Finally, finally, the old G-Class can rest easy, as Mercedes has the first entirely new G-Class ever planned for 2018 release, possibly as a 2019 model. While technical and visual details are being kept under lock and key at the company, interior shots have recently been released.

As shown in the pictures above, the new G-Class is continuing its trend of becoming a luxury vehicle, with richly-looking–key distinction, that–materials. Old military men familiar with the G-Wagen’s of their service years will be stunned by how far it has come.

Mercedes has also released some random measurements from the new vehicle, detailed in the table below:

The new G-Class will be debuted at the 2018 North American International Auto Show in Detroit, and will go on sale by late 2018 in the US market.

Caught by Mustang6G.com user “Bullitt” while the car was filming a commercial, the picture above seems to detail an upcoming ‘Bullitt’ edition of the Mustang. Inspired by the classic Mustang fastback driven by Steve McQueen’s character, Frank Bullitt, in the 60’s classic Bullitt, the ‘Bullitt’ line of Mustang’s last made an appearance over 10 years ago.

Then, the Bullitt Mustang was limited production, and featured distinct stylistic changes including being green, sporting a spoiler-free trunk, retro five-spoke wheels, and a de-badged (mostly) body. Now, it seems that the new Bullitt is following the same formula, down to a T.

Equipped with the 2018 Mustang’s updated bodywork, the car looks to come equipped with 5-spoke wheels, red Brembo brakes, black exhaust tips, and a mostly de-badged body, apart from a new crosshair badge at the rear.

Past Bullitt’s also did not come equipped with fog lights, and were only available with the V8 engine. Expect more of the same here, although with Ford Performance experiencing an up-swing in business, it would not be surprising if the standard 460-hp 5.0L V8 made a smidge more power.

As these spy photos came to the world from Chicago, it is a safe bet that the Bullitt will be debuting at the 2018 Chicago Auto Show in February.