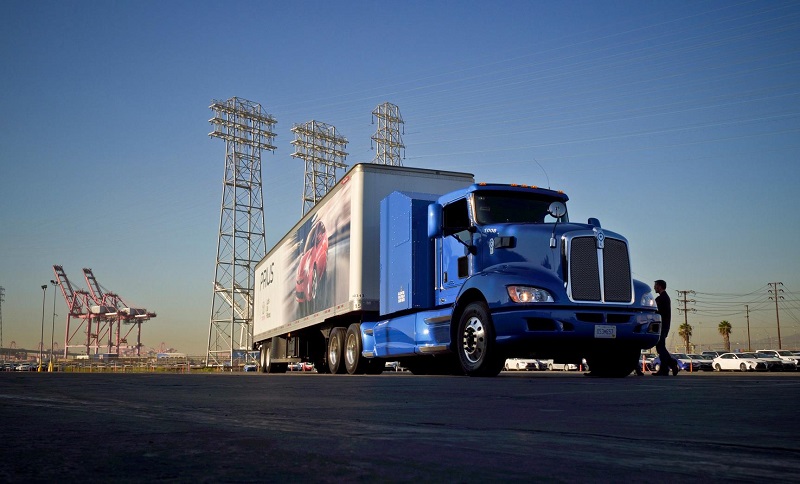 Beginning October 23rd, Toyota will begin fielding a potential replacement for current heavy-duty shipping trucls. Dubbed ‘Project Portal’, the truck is powered by a hydrogen fuel cell system designed for heavy-duty truck use. Classed as a class 8 vehicle, this proof of concept has already traveled 4,000 developmental miles, and is now taking the step to real world testing, moving goods from select Port of Los Angeles and Long Beach terminals to surrounding rail yards and warehouses for distribution.

‘Project Portal’ is powered by a surprisingly small 12kW-h battery, which is itself fueled by a fuel cell for a total of 670hp and 1,325 lb-ft of torque, exhausting nothing but water vapor. The fuel cell is a surprisingly production-ready unit, as it is simply two production Mirai fuel cell stacks bound together.

The concept’s gross combined weight capacity is 80,000 lbs., and its estimated driving range is more than 200 miles per fill, under normal drayage operation.

In what seems to be a growing trend among the world’s cities, Paris has made moves to ban internal combustion engine-powered vehicles (ICE) from the city streets by 2030, per a report from Reuters.

Unlike many of the areas which have voiced their intent to ban ICE-powered vehicles, Paris is already well on the way to such a goal, with car-free days already imposed, and restricting vehicles over 20 years of age from entering the city. Now, by 2030, any car entering the city will have to be electric.

The 2024 Olympics, set to be held in Paris, will also likely instigate more pronounced action on the ban than other locals. This ban, combined with the total ban of the sale of gas and diesel cars by 2040 in France, is set to make France the anti-enthusiast capital of the world.