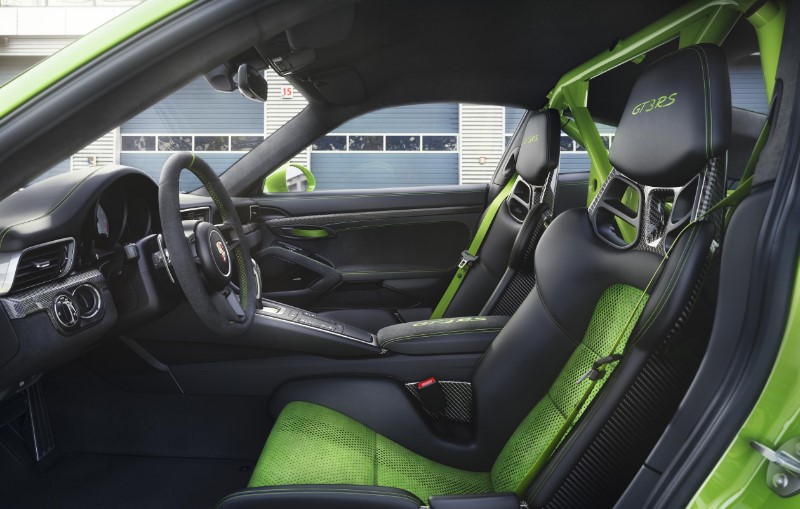 Porsche has today revealed their newest track-missile, the 2019 911 GT3 RS, ahead of its official debut at the Geneva Motor Show. Shown in a bold–and stellar–choice of green, the GT3 RS is, like every Porsche RS model before it, adds to an already existing package, in this case the 911 GT3.

Powered by a naturally aspirated 4.0L flat-six producing 520hp and 346lb-ft of torque, the GT3 RS sends power to the wheels via a seven-speed PDK double-clutch transmission. To handle all of this power, the body is equipped with an RS-specific aerodynamic body kit, which produces significant downforce at speed.

What truly adds the ‘RS’ to this package is the suspension tuning: not only is the ride height manually adjustable, all of the suspension links have been replaced with ball joints. This combined with the aerodynamic kit, should make the RS a monster at the track.

More than likely due to a highly detailed leak, yet unconfirmed leak, yesterday, Ferrari has officially revealed their 2019 488 Pista. Replacing the 458 Speciale, the 488 Pista is a track-focused, mid-engine flagship from the company.

Nothing has been mentioned on price or availability, however expect these details to come at the Geneva Motor Show.

Volvo has today unveiled the new V60, their five-door family wagon. As a company with a long lineage of nice wagons, the company had to ensure the new V60 was easy to live with, without boring owners to death.

The new V60 seems to deliver on paper. The looks are anything but boring, with most people likely to describe the car as attractive. Performance is the choice of the buyer, as the V60 will be available in FWD with 250hp and AWD with 316hp. Automatics are the name of the game.

The car is, like any good Volvo, packed full of safety and convience technology, including heavily-aided driving on roads up to 80mph, as well as auto brake technology, with recognizes pedestrians, animals, and cyclists. It will even initiate braking to dampen an  impending head-on collision.

Availability and pricing has not been announced.

The decision follows a recent internal investigation into reports of inappropriate behavior. The review determined certain behavior by Nair was inconsistent with the company’s code of conduct.

“We made this decision after a thorough review and careful consideration,” said Ford President and CEO Jim Hackett. “Ford is deeply committed to providing and nurturing a safe and respectful culture and we expect our leaders to fully uphold these values.”

Said Nair: “I sincerely regret that there have been instances where I have not exhibited leadership behaviors consistent with the principles that the Company and I have always espoused. I continue to have the utmost faith in the people of Ford Motor Company and wish them continued success in the future.”

Nair has been president of Ford North America since June 1, 2017.  Prior to that, he served as Ford’s head of global product development and chief technical officer.

Nair’s replacement will be subject to an announcement in the near future.